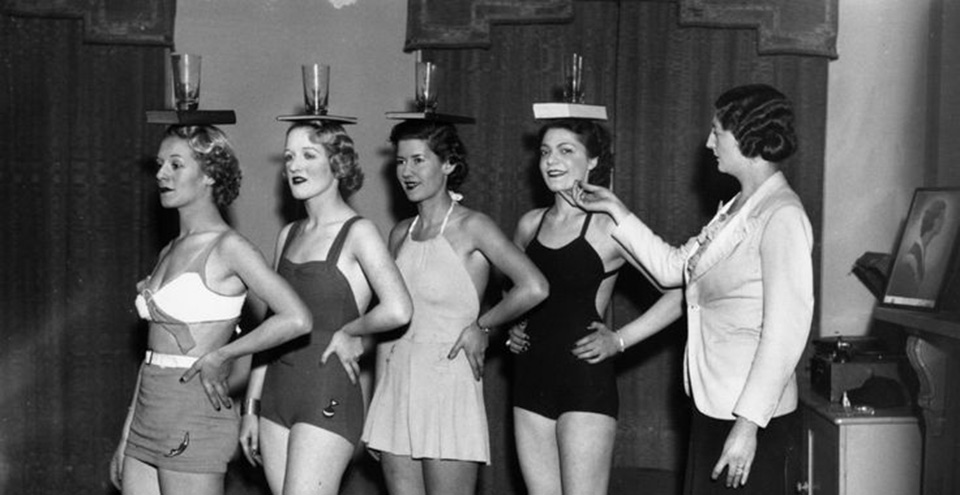 Image: Pinterest
Coloured dresses, honeymoon funds, special hashtags... when it comes to modern weddings, it seems the only rule these days is that there are no rules.
Indeed, that's exactly what we told you a few weeks ago. But as much as we love a wedding rebel, the old-school etiquette and traditions are still pretty cool - did you see Benedict Cumberbatch's engagement announcement in the newspaper? Swoon. The best part is, upholding traditional etiquette doesn't have to mean winding the clock back 50 years or handing over total control to your mum. Getting your Downton Abbey on can be as simple as knowing how to word your invitations, who needs a plus-one and how to let your guests know you'd much rather a contribution to a wishing well than another toaster. We know it's this easy because we went straight to three etiquette coaches to demystify the wedding etiquette minefield and give us the skinny on all things proper - for both traditionalists and trailblazers. 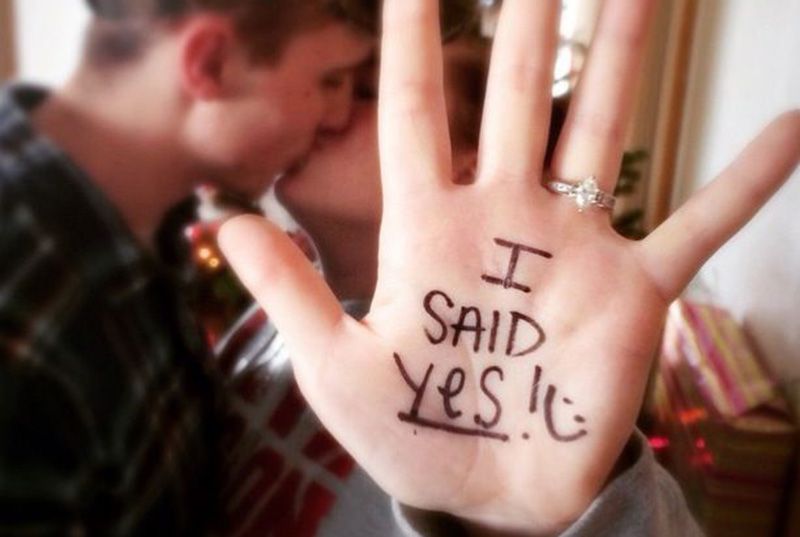 Image: Pinterest
Old school
Way back when, in a time before ring selfies, Kimmy K and Facebook, declaring your freshly-minted engaged status was ringing up your local newspaper. “Traditionally, the only way to announce an engagement was through the newspaper, which was posted by the bride’s parents,” says Anna Musson, founder of The Good Manners Company. From there, friends and family were told in person or over the phone.

New school
If you're going to share your news on social media, make sure the right people already know, advises Anna. Parents should always be told first, and this should be done face-to-face, on the phone or even over Skype. Close friends and family are next. “If someone is not reachable, hold off spreading the word until they have been reached. Your sister travelling in Bulgaria would not be amused to read about your engagement from friends on social media," Anna says. Once you’ve checked these people off, it’s time to send out texts to other family and friends – and post a pic for your Instagram followers, of course.

You might also like...
Not sure how to announce your engagement? Maybe don't do this...
Is your left finger donning some new bling? Read this before your hit the 'share'

Image: Pinterest
Old school
Sure, this is probably a no-brainer, but invitations are more than just an excuse to waste spend hours on Etsy and Pinterest. Treska Roden from Sydney School of Etiquette says there are three main purposes of an invitation: to let your guests know they are invited, to give all the details of the day and to let guests know if they have a plus one. “Those over the age of 18 in families will need to receive an individual invitation,” Treska explains. “No invitation means they have not been invited.” If you want to follow tradition, an invite in the post is the way to go (hello, stationery shopping!) but where you find your invitation is totally up to you. It could be a bespoke design with swish calligraphy, a DIY piece you’ve glued together or off a pad from your local newsagency.

New school
OK, so there aren't really any radically modern takes on sending invitations. Even if you're a contemporary bride who loves her mod-cons, chances are you'll still send out your invites the old-fashioned way: in an envelope with a stamp. An e-invite is a tech-savvy alternative, says Treska, but they should only be used for the most casual of weddings.

Is it okay to not invite kids?

Image: Pinterest
Old school
Back in the day, weddings weren't always a super swish occasion, and the children of your guests were often welcome, especially when there were nannies or family on hand to make sure they didn't run amuck.

New school
Having children at your big day is something to decide early on in your planning process. The choice to have a child-free wedding is completely up to you, says Treska. It's also something you shouldn't feel bad about. “It still costs a lot of money to invite children to a reception and they may be taking the place of an adult you could have otherwise invited.” If you don’t want kids running around your reception, let your guests know by only addressing your invitations to the adults. Or, if you want to really get the message across, statements like “This is an adults-only wedding” or “Please respect our wishes for a child-free reception” are polite and clear.

Who makes the cut?

Image: Pinterest
Old school
Guest lists should include the whole family, especially if the whole wedding is being paid for by your parents. To make sure your guest list doesn't get out of hand, but that you also don't offend anyone, invitations can be sent out in rounds, which leaves room for more guests to be invited when negative RSVPs come in.

New school
No matter how modern your nuptials, the obligatory invite will always be a necessary evil but that doesn’t mean you have to end up a with a guest list longer than your veil. “There is no need to invite people you don’t know or to blow your budget out of a feeling of obligation,” explains Zarife Hardy, director at Australian School of Etiquette. “The best place to start is to agree on numbers within a budget and work back from there.” Asking your parents if they’d like to invite guests is a thoughtful touch – within reason. “Invite people who you know will be in your lives within the next five years,” Zarife recommends.

Who foots the bill? 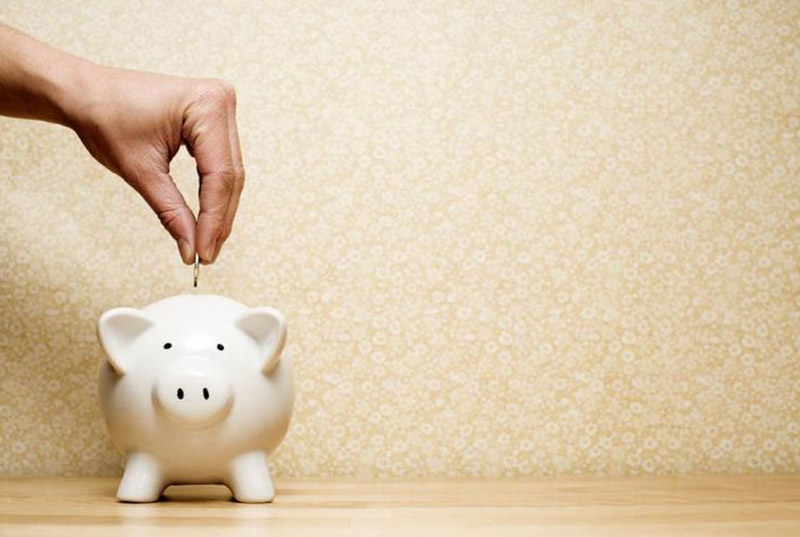 Image: Pinterest
Old school
Traditionally, wedding costs were broken down between the bride’s and groom’s families. The bride’s parents would cover expenses such as the engagement party, flowers, reception, invitations and the dress, leaving the groom’s parents to pick up the honeymoon, rings, a rehearsal dinner and the marriage license.

New school
With modern couples now paying for the wedding themselves, especially if they already live together, Zarife recommends that contributions should be organised according to the willingness and ability of the families wanting to chip in. Expecting people to pay for certain things, without discussing it first, never ends well, so the 'Who's going to pay?’ conversation is best had early on.
You might also like...
The wedding rules you CAN break
Are you ready to be a wedding rebel?

The gift of giving... what?

Image: Pinterest
Old school
History lesson time: the gift registry was originally a back-up for distant relatives or family members who lived far away, to gift newlyweds with something that would suit their new home. It hasn’t always been a standard wedding fixture. “It was never meant to be the first port of call for couples with high hopes for a wedding bounty,” Anna says. As for giving money? For Anna, that’s a no-no. “Unless giving cash at a wedding is part of your family’s culture, asking for money is simply not good taste. The cash gift has no mystery. Its value is clear and unfortunately allows for a value criteria to exist.”

New school
When it comes to asking for gifts – through a registry, wishing well or honeymoon fund – it comes down to tact and making sure your guests don’t feel pressured to spend money they don’t have. Never explicitly state that you'd like cash or a donation unless it's to a charity. Likewise, if you have registered, don't print this on your invitation; tell your friends and family in person (cue the carefully-dropped hint). The most important thing to remember is to give your guests an option: it should be up to their discretion what they give.